“Orpheus in the Berkshires” supports Soldier On veterans

NORTH ADAMS – United States Army veteran LouAnn Hazelwood termed her professional acting debut “a Cinderella story.” Hazelwood’s birthday is July 5, and over the past year, her life has changed dramatically.

“Last year, at this time I was homeless,” the 61-year-old woman said. “This year, professional pictures were taken of me in costume and will be given to me as a gift. I came from over 30 years of abuse. I’ve found my voice and my courage. For me, it’s been miraculous.”

Hazelwood and about 75 other community residents opened the play, “Orpheus in the Berkshires,” on Thursday at the new Greylock Works venue, 508 State Road (Route 2). The run for the hour-long play continues tonight at 7:30 and concludes at 5 p.m. on Sunday, and is free to the public. 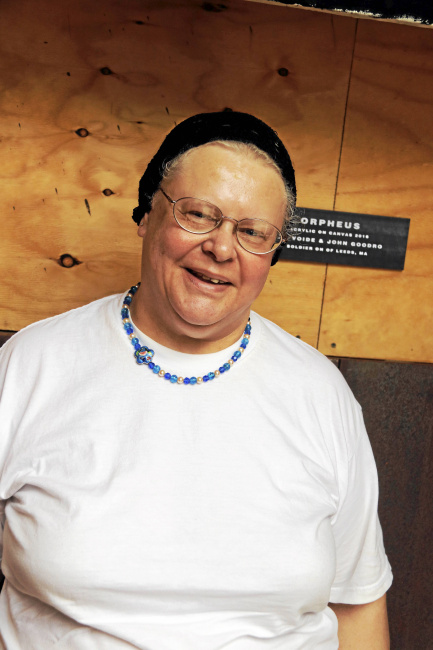 United States Army veteran LouAnn Hazelwood is acting in a collaborative production of “Orpheus in the Berkshires” at the Greylock WORKS venue from July 14 to 17. Hazelwood is participating with the Leeds-based Soldier On initiative, which is one of four groups partnering with the Williamstown Theater Festival for a community arts project. (Sue Bush — The Berkshire Eagle)

In the play, Hazelwood will act the part of one of the grandmothers looked after by Orpheus.

These performances are part of a community engagement initiative launched by the Williamstown Theatre Festival and led by Obie Award-winning playwright, Lucy Thurber, and festival associate director, Laura Savia. Additional cast members and materials were contributed through partnerships with the Williamstown Youth Center, the Williamstown Council on Aging; the Osher Lifelong Learning Institute and Rock On band camp, both based at Berkshire Community College, and others. Theater festival actors round out the cast.

Hazelwood participates with the Soldier On program based in Leeds. Launched in 1994, Soldier On is a private nonprofit organization providing homeless veterans with transitional housing and a number of support services.

“The show is a culmination of the first year of a multi-year community engagement initiative,” she said. “We were seeking partner organizations for this and we reached out to Nathan Hanford, who runs the arts program for Soldier On. That’s how we met LouAnn and all the wonderful people from Solider On.”

Among those are Ray Voide, a 56-year-old U.S. Marine Corps veteran, and United States Navy veteran John Goodro, 51. The two combined artistic talents to create “Palette,” a painting displayed at the Greylock Works entrance for the duration of the performances. 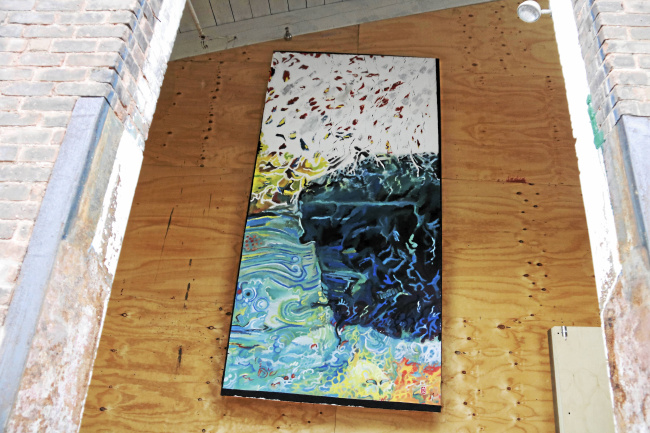 This painting titled “Palette” hangs at the Greylock WORKS entrance on Thursday. The painting was done by Soldier On participants Ray Voide and John Goodro as part of a community engaging art partnership with the Williamstown Theater Festival. (Sue Bush — The Berkshire Eagle)

Voide has been involved with Solider On since December 2015, and spoke about how the design was created.

“I was a homeless artist in New York City,” he said. “One day as I was preparing to clean my palette, the white went across all the other colors and I liked the way it looked. I liked it so much that I took a picture of it and framed it.”

In February, Hazelwood, Voide and Goodro began traveling to Pittsfield with other members of Hanford’s art group, to attend a workshop series led by Savia and Thurber, The experience was life-changing, they said.

“I’ve done creative writing in the past,” Voide said. “I’ve written a play before, and working with (Thurber and Savia) was exciting. This group has helped us discover us.”

With encouragement, Voide’s photograph became a painting. Voide and Goodro painted the piece together. When the finished work was delivered to the play venue recently, the moment created a once-in-a-lifetime memory, Goodro said.

“It was exciting,” he said. Goodro said he has been with Soldier On since December.

“When we delivered the piece, John turned to me and said, ‘I feel big,'” Hanford said.

“Soldier On saved my life,” Goodro said. “I liked what they offered and now they have art for the veterans. I never thought I’d pick up a paint brush and I give a lot of credit to Nate. He’s a genius.”

Hanford said he believes the veterans possess the creative spark.

“It’s the work that they do; they are the treasure,” Hanford said. “The value is in them.”

Working with the theater professionals felt right for Hazelwood, she said.

“I felt involved right from the start,” she said. “When I was taking part at the workshop, I was told that they were considering me for the one of the parts. I was really excited.”

“This program really opened a door for us,” she said. “It’s done so much for LouAnn. We’ve watched her blossom; she’s bubbling over. It’s been great to see her take on this role.”

And that is the gift of the arts, said Savia.

The arts are a unifying force, Thurber said. “That’s the hope of art, the hope of the theater, that with all of our different struggles, our places in life, we can get together and create something.”