Soldier On’s new chaplain: ‘I like being all things to all mankind’ 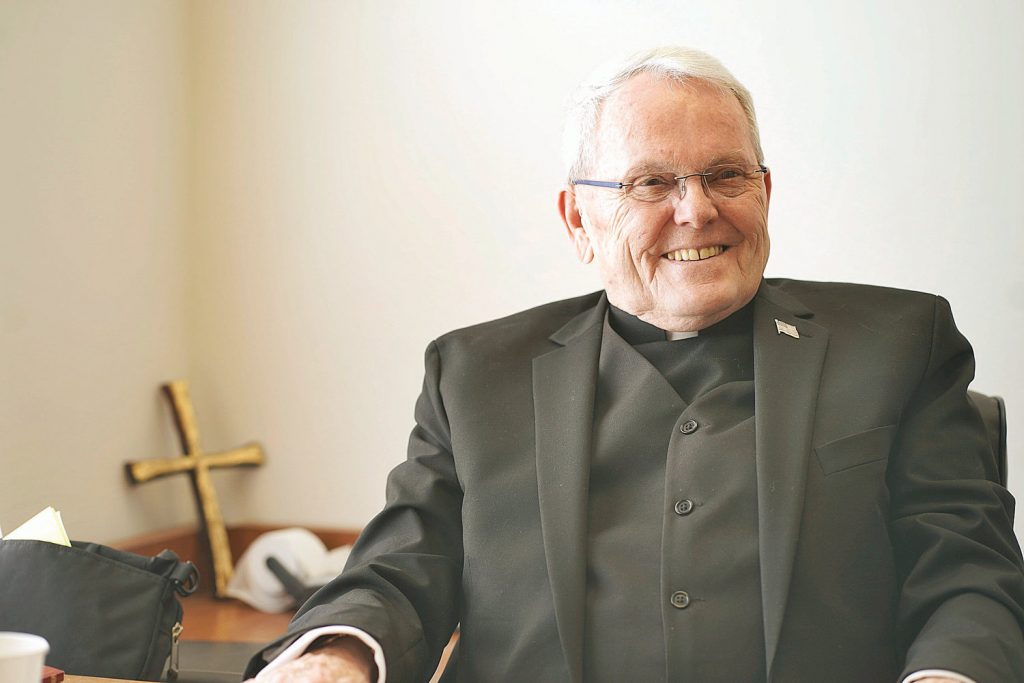 BEN GARVER — THE BERKSHIRE EAGLE
Father Peter Gregory is the new chaplain for Soldier On, Thursday, February 28, 2019. Gregory is very active in the community eve though he retired from St. Charles Church two years ago.

By Dick Lindsay, The Berkshire Eagle

PITTSFIELD — The Rev. Peter Gregory’s four decades-plus of priesthood is one of destiny.

For 28 years, the city native was pastor of St. Charles Church in Pittsfield, where he was baptized as a child and his parents exchanged vows. Now, two years after leaving his pastoral duties behind, the Air Force veteran has been called to help homeless veterans get back on their feet.

Soldier On has named Gregory its new chaplain, succeeding the Rev. Quentin Chin, who left the position in December.

Before entering the priesthood, Gregory served full time in the Air Force from 1962 to 1966, continuing as a reservist until 1995. He credits the military training with giving him structure, discipline and the experience of the outside world that have served him well as pastor.

“I’ve come full circle. I believe this came from the Lord — Holy Spirit-sent,” he told The Eagle on Thursday, his first day on the job.

“It’s just a great marriage for both of us,” he said. “The veterans community we serve all want a chaplain.”

Gregory, who will be based in Pittsfield, will lead nondenominational spiritual and religious groups and conduct monthly masses in Pittsfield, Leeds, Agawam and Chicopee. The four Soldier On locations serve up to 450 homeless veterans. There are 250 in transitional programs, with an additional 200 living in permanent housing, according to Soldier On officials.

Gregory also is a part of the nonprofit’s Higher Level of Care Team, an outreach service to former Soldier On residents in assisted living and nursing homes.

“There’s a wonderful spirit here of helping veterans, some broken, but we’re trying to rebuild them,” he said.

Soldier On works in partnership with the U.S. Department of Veterans Affairs and other agencies to provide veterans with shelter and support toward independence that includes homeownership.

“We serve everyone who comes through our doors,” Downing said. “If people relapse here, we don’t throw them out.”

Gregory already had informal ties to Soldier On, being a longtime friend of Downing and CEO Bruce Buckley’s children raised Catholic at St. Charles.

“He has real passion and compassion that he has brought to my family,” Buckley said.

After the ordination July 7, 1973, Gregory was named associate pastor at St. Joseph Church in Pittsfield. The clergyman would later hold several other ministerial positions in the Springfield and Albany, N.Y., area before heading overseas to Belgium in 1983. Gregory spent five years as pastor of Our Lady of Mercy Parish in Brussels and taught in Belgium, before returning to the states as chaplain of Mercy Hospital of Springfield.

Gregory was named pastor of St. Charles in 1989. From there, he also has served as chaplain to several groups, including the Pittsfield Fire Department. He remains the spiritual voice of the city firefighters.

Being Soldier On’s first Catholic chaplain isn’t an issue for Gregory or the veterans he has met so far.

“They look at me as a chaplain, and that’s what I want.” he said. “I like being all things to all mankind.”