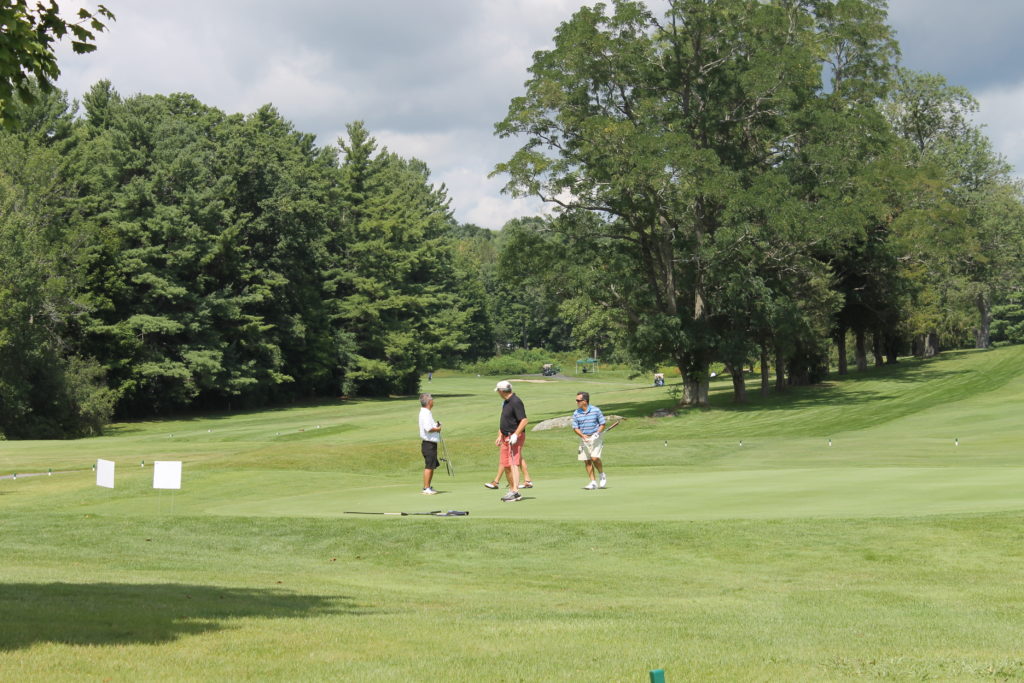 On Friday, August 26th, 2016 232 golfers participated in the 6th Annual Soldier On Charity Golf Tournament was hosted by General Dynamics at Cranwell Resort Spa and Golf Resort. It was a gorgeous day which led to another successful tournament. Soldier On graciously thanks General Dynamics and their leadership team for organizing the event. The time and effort that each member of the team dedicates to see that the day runs effortlessly does not go unnoticed.

Soldier On would also like to thank all of the sponsors. 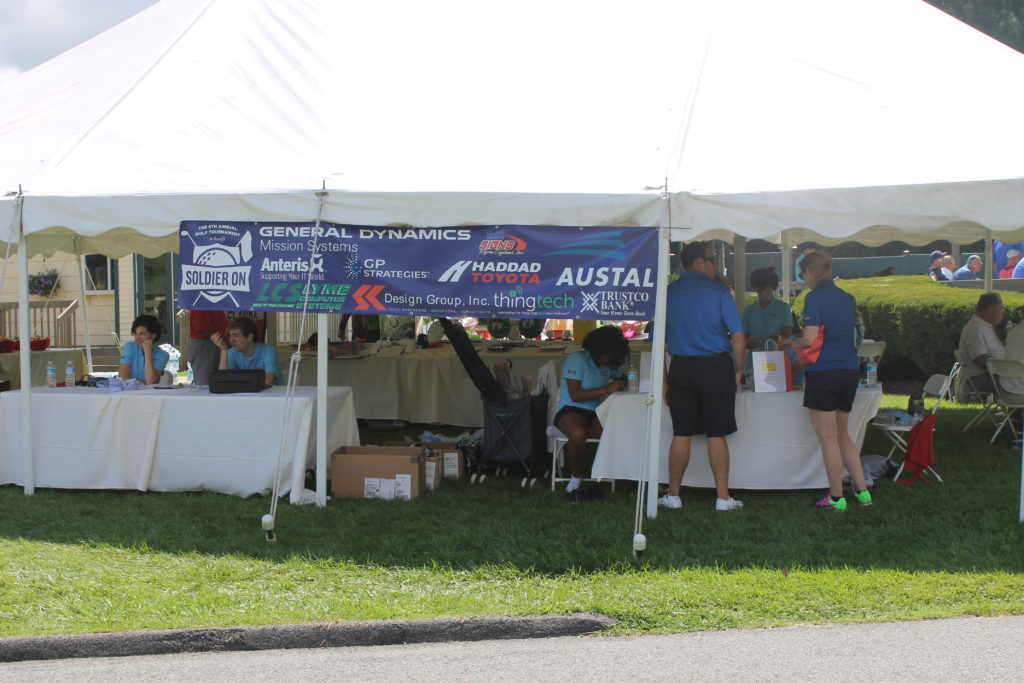 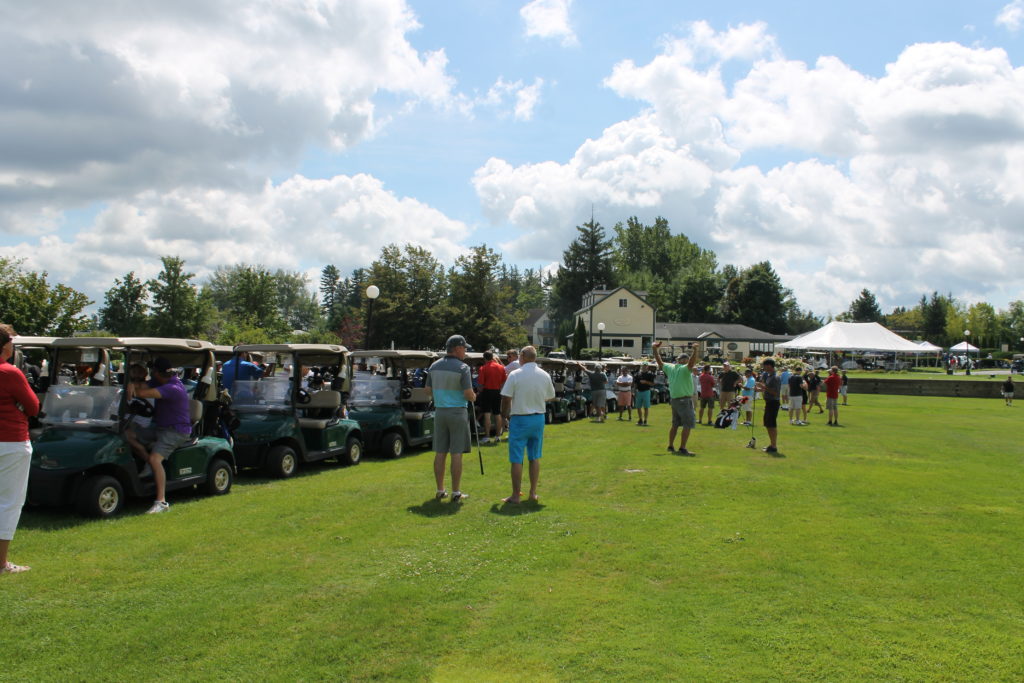 There was a morning and an afternoon flight that played captain crew. 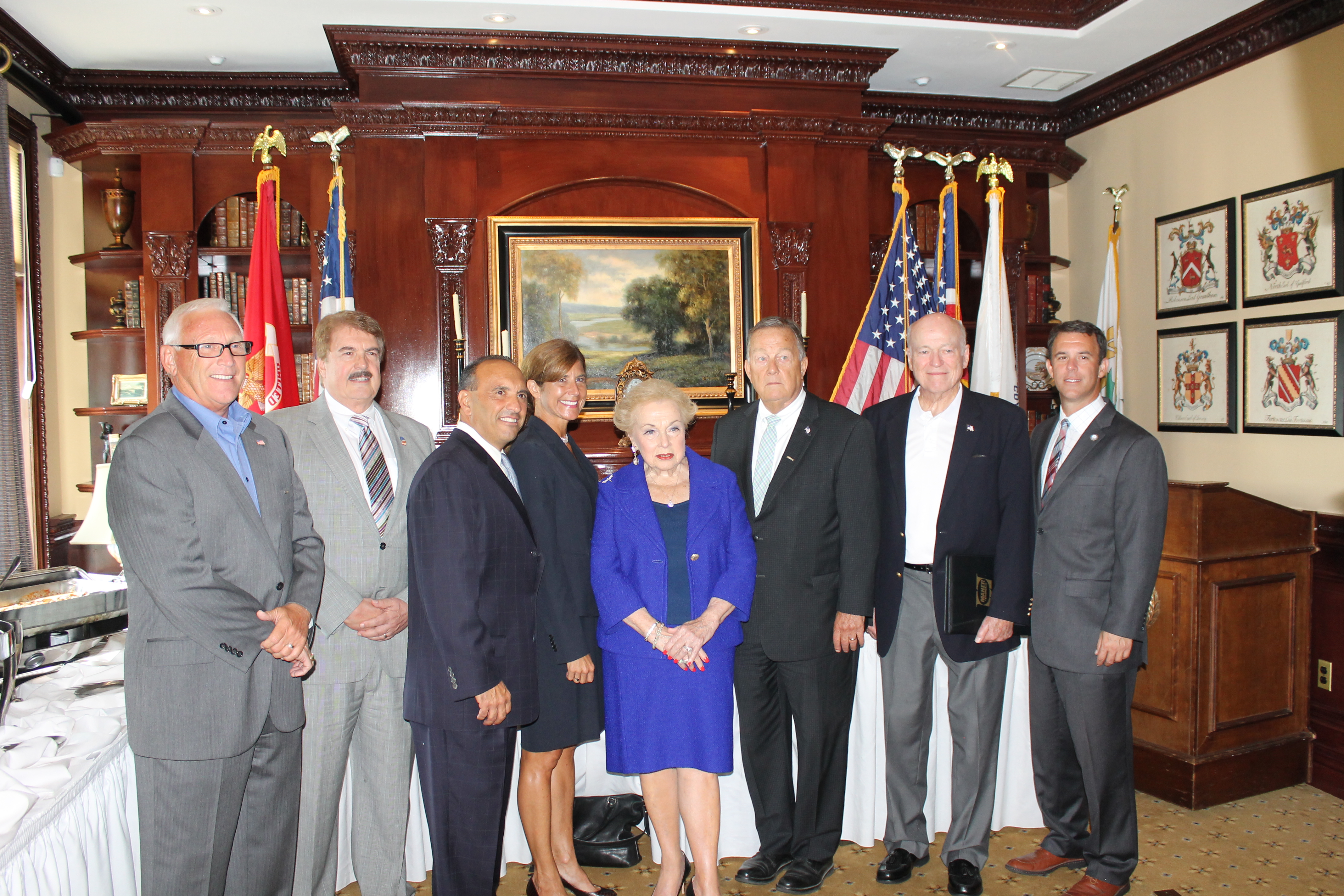 By one count, New Jersey is home to some 2,000 homeless veterans. On Tuesday, the public gained a longer look at plans to correct course and put roofs over the heads of ex-service members from Monmouth County and beyond.

Political leaders and others gathered at Eagle Oaks Golf and Country Club in Farmingdale for the unveiling of a project that aims to elevate scores of homeless veterans in Tinton Falls.

The nonprofit organization Soldier On presented its plan to house homeless veterans – aided in part by a deal announced earlier this month in which the borough sold the group 12.59 acres on Essex Road near the Jersey Shore Premium Outlets for $1. 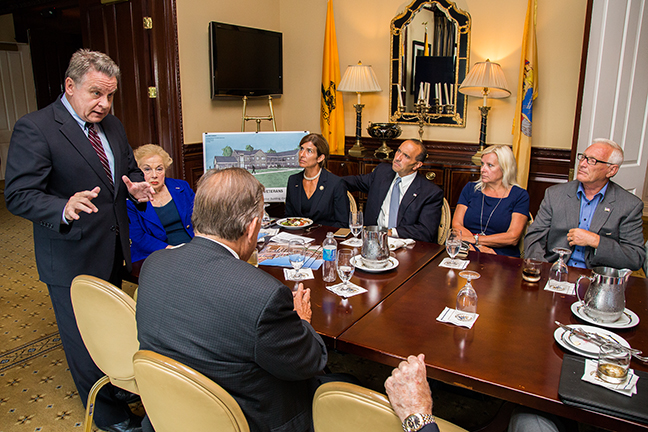 “When I talk to veterans, every one of them says that housing is their biggest need, bottom line.” U.S. Rep. Chris Smith, R-4th, told the Press.

The facility would house up to 100 homeless veterans and provide services, such as job training and mental health services, aimed at plugging them back into the community.

Below are three things to know about the project:

1. A lot of red tape remains

Soldier On has yet to secure financing for the project. CEO Jack Downing said his company will work with agencies that fund affordable housing projects in New Jersey to help pay for the facility, estimated to cost about $20 million.

2. It’s unclear how many units will be built

Preliminary plans say that development will comprise up to 100 units. Soldier On hasn’t settled on a final number. Once engineers review the site and confer with the planning board, the number of units will become clearer.

Veterans will have an ownership interest in the apartments. Soldier On offers its residents the opportunity to buy into a cooperative, and pay $2,5000 for a share of ownership. That share allows them to rent a unit. Downing said units in the Tinton Falls project are expected to rent for $1,025 per month.

3. Not all the veterans will be local

New Jersey has among its homeless population an estimated 2,000 veterans of the United States Armed Forces, according to the state Department of Military and Veteran Affairs.

The remaining units will be offered to veterans in other areas served by Soldier On, mainly in New England.

Downing said that even though a lot of work remains, he expects veterans to move in within four years.

Tinton Falls Mayor Gerald Turning tole the Press that this project is “the best thing I’ve even done as an elected official.” 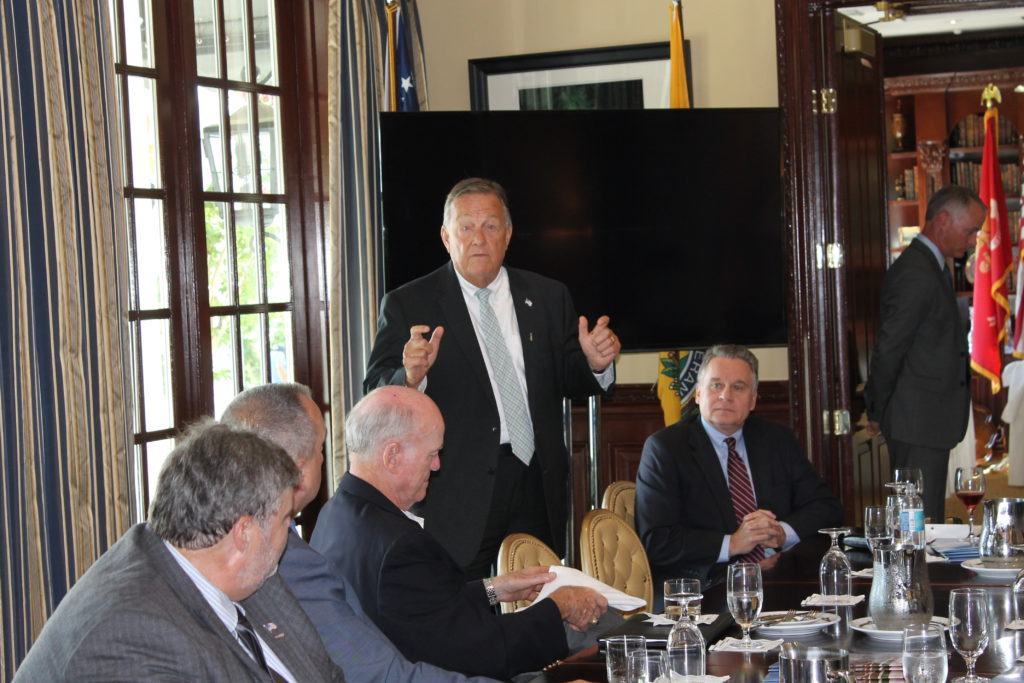 At the request of North County civic leaders and homeless providers, Soldier On was invited to undertake a Veteran’s permanent affordable housing project in Grafton County. As one of the largest private providers of veterans’ supportive services, Soldier On operates a complex continuum of housing and support services for veterans that is designed to move them from homelessness toward permanent homeownership.   On average over 8,500 veterans and family members are served annually through its emergency, transitional and permanent housing programs.

The Plymouth Veterans project located on 12 acre site on Boulder Point Rd will provide housing and support services to New Hampshire veterans, especially those that prefer to remain in the North Country.  Unique to Soldier On is the development of affordable Veterans housing under a limited equity cooperative model. The model provides each veteran with a real stake in their home, in their community. Veterans are involved in the Cooperative’s Management and in the day to day operations- providing a sense of purpose that is essential to their recovery and long- term stability. 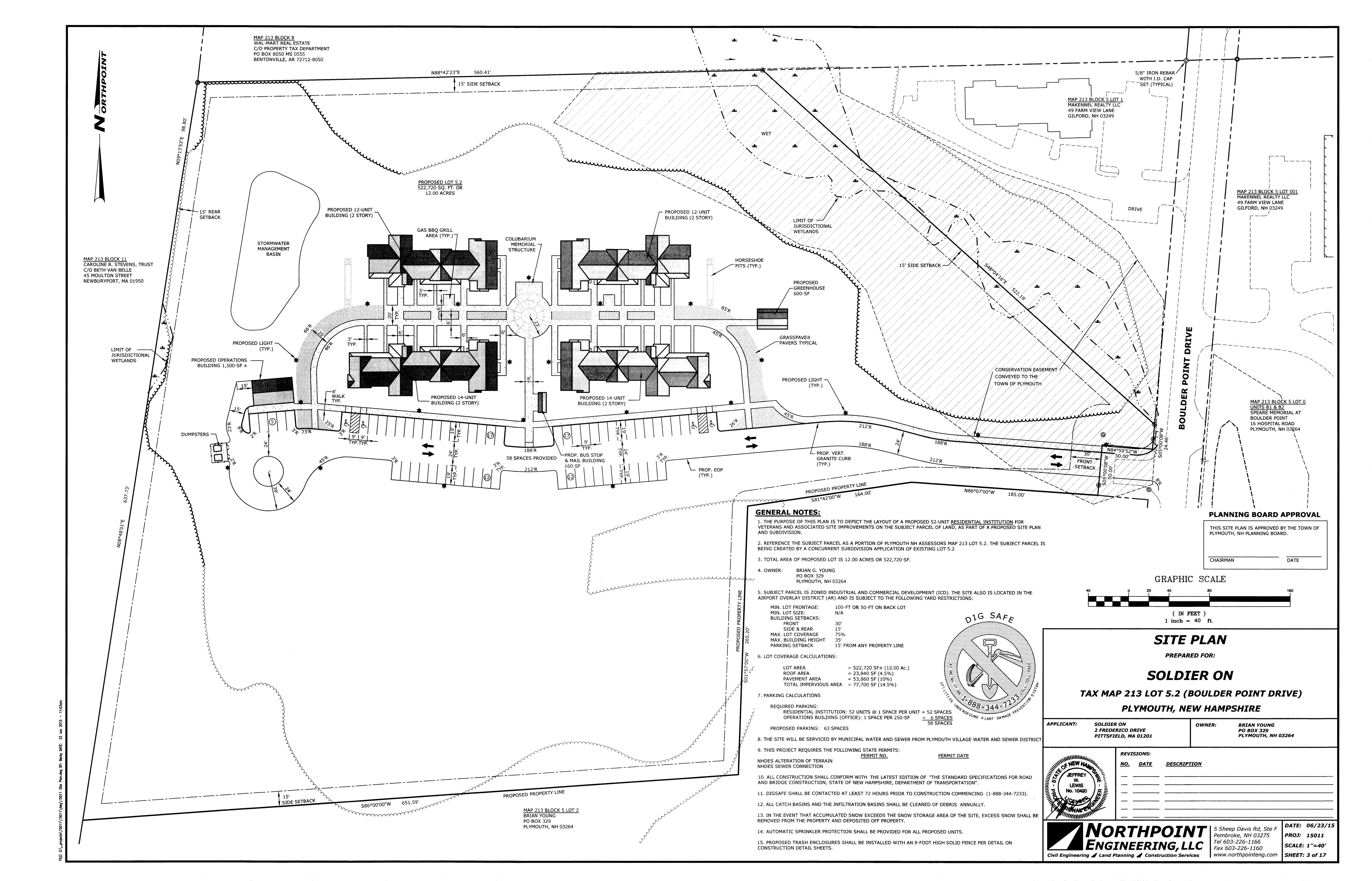 The Veterans Administration through their Medical Centers in Manchester and White River Junction, VT will play an active role in the identification of eligible veterans and coordination of VA services. New Hampshire Housing Finance Agency will administer VASH rental assistance vouchers that will ensure housing affordability for each Veteran.

The commitment of VASH requires the project to commence construction by April 2017. Soldier On has assembled a qualified development team to ensure that with the support of the Town of Plymouth and participation by key funding partners, the project will meet that aggressive deadline and be housing New Hampshire veterans by August 2018.

“Each of these projects will promote job creation and economic development by addressing critical priorities, including increasing access to substance misuse services, updating our long-term economic development strategy, combating veterans homelessness, strengthening our infrastructure and supporting our travel and tourism industry. I thank our partners across the region and in the federal government for their collaboration, and I look forward to continue working together to keep New Hampshire’s economy moving in the right direction,” Governor Hassan said.

“Today’s announcement is great news for jobs and the economy in northern New Hampshire,” said Senator Shaheen. “Each of these projects will help revitalize the North County economy by addressing important infrastructure needs and supporting small business growth. I’m glad to see the NBRC prioritizing development in North Country communities and businesses, building on the region’s strengths and expanding opportunity in the Granite State.”

“The people and communities of the North Country face unique challenges and obstacles, especially when it comes to economic development, but partnerships like the Northern Border Regional Commission invest in projects that help to create jobs, reduce poverty, and ensure that the resilient people of the North Country get a fair shot,” state Senator Jeff Woodburn said. “We need to make smart investments in order to expand opportunity for all, support businesses throughout our state, and lay the foundation for a new generation of economic growth. The announcement of more than $1.5 million into the North Country’s economy is a great shot in the arm and I thank Governor Hassan, our Department of Resources and Economic Development, Senator Shaheen and our Congressional delegation for helping to secure this vital funding.”

“I would like to thank Governor Hassan and Senator Shaheen who have worked with our North County partners, lead by Catherine Brentwood and Alex Ray, for this opportunity to move forward with this vital project,” Soldier On CEO Jack Downing said.

Johanna Montalvo is proud to say that she is finally able to be the real her.

In 2000 Johanna started her eight year tenure in the military with the Puerto Rico National Guard.  Two years later she found herself stationed in Fort Drum, NY on active duty with the United States Army, where she remained until 2008. After her time in the military, Johanna fell on tough times. She suffered from PTSD, which she tried to remedy with substance abuse.

Dealing with the loss of her mother in 2014 and her relationship falling apart due to her addiction, Johanna found herself suicidal in August of 2015. Just days before the year anniversary of her mother’s passing Johanna was able get into an AdCare facility to detox and start her journey of recovery. She quickly moved on to The Hope Center in Springfield. While sitting in a group meeting in September, Johanna was overcome with guilt. There were warrants out for her arrest and up until that moment she had disregarded them. Johanna knew she could not move forward without righting these wrongs.   She followed her conscience and turned herself in at the Holyoke District Court. Johanna was taken to the Western Massachusetts Regional Women’s Correctional Center in Chicopee to serve her sentence.

As Johanna awaited her court appearance for November 6th, Alexis Truslow, Soldier On Psychotherapist, visited Johanna and interviewed her asking a series of questions regarding her childhood, trauma, and addiction. At that time Johanna was not aware she was a potential candidate for the Veterans Treatment Court in the Holyoke District Court.  On the morning of November 3rd she was advised to get ready for court. It was there she was given the option to take part in that program. Johanna was released that same day.

In December, Johanna joined the Solider On Women’s Program. Soon after, she was chosen to be on the house committee. She quickly became an active resident who made herself visible and available to the other women within the house.

On January 21, 2016 Johanna was not only the first woman, but the very first person to complete Phase 1 of the Veterans Treatment Court program. As of today she has completed 3 phases and anticipates graduating from the program in May 2017.  While Johanna is only required to report to court once a month, she attends every week to support the other men and women veterans in the program.

With her record, Johanna has had a difficult time finding work; but Dave Felty, from Homeward Vets, believed in Johanna despite her past and gave her the chance to volunteer at Homeward Vets.  In addition she volunteers at Hope for Holyoke, a center that helped her persevere through detox.  Johanna also works weekly lunches at the World War II Club in Northampton

Johanna is now moving into her own apartment in downtown Northampton, which is fully furnished by Homeward Vets. Soldier On’ s Supportive Services for Veterans and Families (SSVF) program aided her with the moving expenses for the furniture, the security deposit, and plans to provide assistance for her utilities.

Even though Johanna is leaving Solider On, she plans to stay in touch with not only the women from the program, but Sara, Stephanie, and other Soldier On staff as she will continue to get support from the relationships she has built over the past 8 months.

With the support of Access to Recovery (MA-ATR) Johanna has passed her driving test and received a valid driver’s license. She has built her resume with the help Massachusetts Rehabilitation Commission and now has an interview at the beginning of August. Johanna’s ultimate goal is to become a Certified Peer Support Specialist so she can provide her peers with the same encouragement that she once needed.