Soldier On would like to give a HUGE Thank You to the members of the Blood Brothers band. 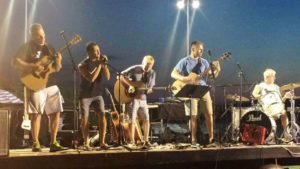 The Blood Brothers were formed in 2013 by Tim Tomko and Bruce Devlin, who are the two lead singers and also play guitar. In 2014, the two more members joined the band, Kim Cole, drummer, and Jeff Sullivan, bass and keys.  The band plays a diverse library of cover music in addition to original songs.